It’s Valentine’s Day, and most of us are focusing on notes, sweets, and spending time with loved ones.  But in looking at the root of the holiday, there is a deeper meaning and lessons to be learned.

Like many of our holidays (“holy days,”) Valentine’s Day began as an observance on the church calendar marking the death of a saint, a believer who numbers among the “great cloud of witnesses” in Hebrews 12:1 that we can be encouraged by and take example from.

Valentine was a priest in Rome during the rule of Claudius II in the late third century. 1 St. Valentine.  Catholic Online. Accessed 14 February 2014.  http://www.catholic.org/saints/saint.php?saint_id=159   This was still prior to the Edict of Toleration and Claudius did not look upon Christian and their illegal religion kindly.  In addition to this, he was very active on the military front.

So there were two things going on.  First, Christian were being persecuted for their faith.  Second, Claudius banned young men from getting married.  He needed them in his military campaign and believed a wife was a distraction.

In his letter to the Corinthians (1 Corinthians 7,) the apostle Paul actually recommended the same thing. Not that he was against marriage, but because at the time of the writing the Christian were being severely persecuted by Nero. When you are married, your decisions don’t just affect yourself, but your spouse and family as well and that can influence the decisions you make. He was advising that it would be easier to stand for Christ in the crisis they were currently facing without having obligation to others.

Valentine ignored both of these edicts.  He continued to help and support his fellow Christian and he still performed marriages.

He stood firm for his faith.

“I think we must bear in mind that it was a very permissive society in which Valentine lived,” says Father O’Gara. “Polygamy would have been much more popular than just one woman and one man living together. And yet some of them seemed to be attracted to Christian faith. But obviously the church thought that marriage was very sacred between one man and one woman for their life and that it was to be encouraged. And so it immediately presented the problem to the Christian church of what to do about this.”

“The idea of encouraging them to marry within the Christian church was what Valentine was about. And he secretly married them because of the edict.”

. . .  “What Valentine means to me as a priest,” explains Father O’Gara, “is that there comes a time where you have to lay your life upon the line for what you believe. And with the power of the Holy Spirit we can do that — even to the point of death.” 2 Kithcart, David.  St. Valentine, The Real Story.  CBN.com.  Accessed 14 February 2014.   ~ CBN

Because he continued to perform marriages, he was arrested.  There are varying accounts as to what led to his barbaric sentence to death.  Some accounts say that he was sentenced for disobeying the emperor’s decree against marriages.

Other accounts go into more specifics on the details of his imprisonment.  According to the Nuremberg Chronicle, when Valentine was imprisoned, he endeared those around him to him.  He became friends with his jailer, Asterius, and restored the sight of his blind daughter.   Asterius was so impressed by both Valentine’s character and this evidence of miraculous healing that he became a Christian himself.

The Chronicle also records that the Emperor himself  befriended him.  However, when Valentine tried to convert him to Christianity he had a much different response than Asterius.  He sentenced Valentine to a three part execution as punishment for this outrage.  He was first beaten, then stoned, and finally decapitated outside of the Flaminian Gate.  His skull is still kept as a relic in the Basilica of Santa Maria in Cosmedin. 3 Santa Maria in Cosmedin.  Wikipedia.  Accessed 14 February 2014.

(It reminded me of Jesus’s execution, which was also in three parts. He was beaten, flogged, and finally crucified.)

He was originally buried in a tomb  along the Via Flaminia, later a basilica was built over it and it was one of the first stops for religious pilgrims on their way to Rome.  Saint Valentine was so well regarded that for many centuries the gate now known as Porta del Popolo was named Porta Valentini after him. 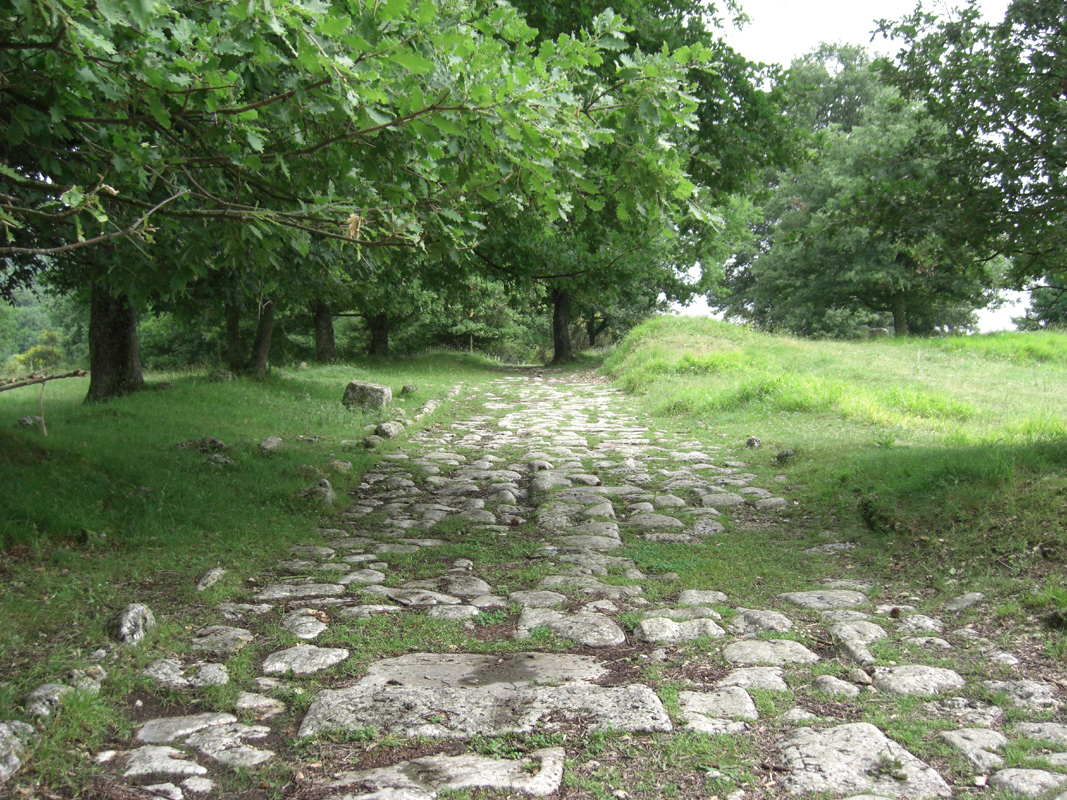 A portion of the remaining Via Flaminia Road

Predictably, among those who are even aware that Valentine’s Day was actually in memory of someone there are those who try to dismiss it by claiming it has “pagan” origins.  (If the enemy can’t stop a person who is all out for God, he will do all he can to obscure, distort, malign, and pervert the memory, witness, and influence of that person.)

A modern myth claims that St. Valentine’s feast day was invented just to replace the pagan celebration of Lupercalia. No, actually, Lupercalia was abolished by the Roman Senate in the late 400s and replaced with the feast of the Purification of Mary. Truly, the Catholic-feast-day-invented-to-supplant-the-ancient-pagan-festival explanation is wearing a little thin—maybe they’ve run out of pagan events and are starting to recycle them. 4 Anderson, Karen.  Give Me Back My Valentine!  Crisis Magazine.  14 February 2014.  Accessed 14 February 2014. ~ Crisis Magazine

The thing that struck me most when reading about Saint Valentine’s life was not the romance of the secret marriages but that he was a stander.

After he became friends with his jailer and the emperor, it would have been really easy for him to just have been quiet, to not say anything.  To just be like everyone else and go along with the crowd.   He could have justified it by saying, “Well, I can help other Christians secretly if I just don’t speak out publicly.”

In my Hebrew class last night, my teacher mentioned a saying by Hillel, a Jewish rabbi who was one of the main Jewish sages of Jesus’s time.

That which is hateful to you, do not do to your fellow. That is the whole Torah; the rest is the explanation; go and learn it. ~ Hillel

It’s very similar to Jesus’s Golden Rule.  But there is a key difference, in Hillel’s it is passive.  Just don’t do to others what you wouldn’t want done to you.  In other word, someone could excuse themselves by saying, “It wasn’t me.”  “I didn’t do it.”  “It’s not my problem.”

How many times have you been in situations where no one will even speak out, let alone actually do something about it?  How aggravating is that?

As another smart Jewish person said once, this is the result of “not doing.”

“Do to others whatever you would like them to do to you. This is the essence of all that is taught in the law and the prophets.”  ~ Matthew 7:12, Luke 6:31

“The Spirit of the Lord is upon me,
for he has anointed me to bring Good News to the poor.
He has sent me to proclaim that captives will be released,
that the blind will see,
that the oppressed will be set free,
and that the time of the Lord’s favor has come.

He rolled up the scroll, handed it back to the attendant, and sat down. All eyes in the synagogue looked at him intently. 21 Then he began to speak to them. “The Scripture you’ve just heard has been fulfilled this very day!”   ~ Luke 4:18-19 NLT  (a fulfillment of Isaiah 61:12)

Not only does God not leave any room to sit back and leave the problems in the world around us to someone else, but that we will be held accountable for what the Holy Spirit convicted us to do but that we didn’t:

If you fail under pressure,
your strength is too small.
Rescue those who are unjustly sentenced to die;
save them as they stagger to their death.
Don’t excuse yourself by saying, “Look, we didn’t know.”
For God understands all hearts, and he sees you.
He who guards your soul knows you knew.
He will repay all people as their actions deserve.  ~ Proverbs 24:12 NLT

We are to do ALL that he did.

Jesus came and told his disciples, “I have been given all authority in heaven and on earth. 19 Therefore, go and make disciples of all the nations, baptizing them in the name of the Father and the Son and the Holy Spirit. 20 Teach these new disciples to obey all the commands I have given you. And be sure of this: I am with you always, even to the end of the age.”  ~ Matthew 28:16-20  NLT

Like Saint Nicholas, Valentine did.  He stood, because he knew the real meaning of love.