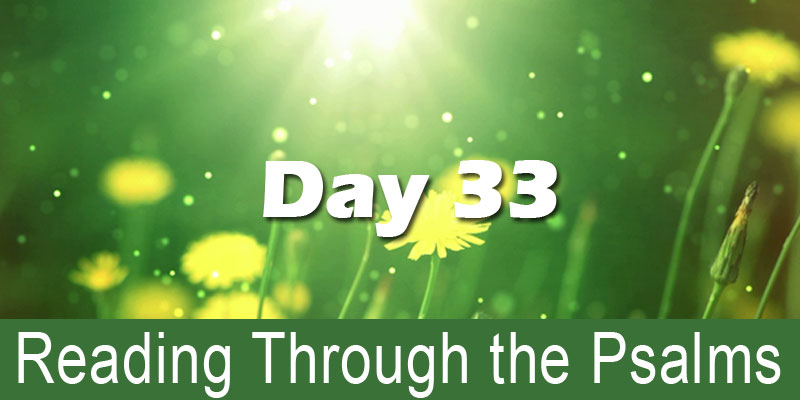 This collection of Psalms includes both praise and the prophetic. In Psalm 33, David reiterates his common refrain to trust in the Lord. Whatever the
circumstance or situation, God alone is our ultimate hope, to put one’s confidence in anything else is foolishness.

Psalm 83 is a prophetic, foretelling a future war in which the surrounding nations will come together in one accord to destroy Israel, but David declares, again, the Lord will be victorious. This particular configuration of allied enemies has not come together as one against Israel to date.

There are many opinions on where this Psalm fits in the End Time prophetic timeline. Some believe that it will be a precursor, one that sets the stage for the peace negotiated by the Man of Lawlessness/the Antichrist (Daniel 9:27) and his End Time reign over the Tribulation or Time of Jacob’s trouble. Some believe it is the same war prophesied in Ezekiel 38-39. There is also the opinion that this war comes at the end of the MIllenial reign when Satan is loosed for a time. (Revelation 20:7)

Whatever the answer, and one day it will be clear, the truth remains that God’s Word stands and he will be victorious.

1 Rejoice in the LORD, you righteous!
Praise is fitting for the upright.
2 Give thanks to the LORD with the lyre.
Sing praises to him with the harp of ten strings.
3 Sing to him a new song.
Play skillfully with a shout of joy!
4 For the LORD’s word is right.
All his work is done in faithfulness.
5 He loves righteousness and justice.
The earth is full of the loving kindness of the LORD.
6 By the LORD’s word, the heavens were made;
all their army by the breath of his mouth.
7 He gathers the waters of the sea together as a heap.
He lays up the deeps in storehouses.
8 Let all the earth fear the LORD.
Let all the inhabitants of the world stand in awe of him.
9 For he spoke, and it was done.
He commanded, and it stood firm.
10 The LORD brings the counsel of the nations to nothing.
He makes the thoughts of the peoples to be of no effect.
11 The counsel of the LORD stands fast forever,
the thoughts of his heart to all generations.
12 Blessed is the nation whose God is the LORD,
the people whom he has chosen for his own inheritance.
13 The LORD looks from heaven.
He sees all the sons of men.
14 From the place of his habitation he looks out on all the inhabitants of the earth,
15 he who fashions all of their hearts;
and he considers all of their works.
16 There is no king saved by the multitude of an army.
A mighty man is not delivered by great strength.
17 A horse is a vain thing for safety,
neither does he deliver any by his great power.
18 Behold, the LORD’s eye is on those who fear him,
on those who hope in his loving kindness;
19 to deliver their soul from death,
to keep them alive in famine.
20 Our soul has waited for the LORD.
He is our help and our shield.
21 For our heart rejoices in him,
because we have trusted in his holy name.
22 Let your loving kindness be on us, LORD,
since we have hoped in you.

1 God, don’t keep silent.
Don’t keep silent,
and don’t be still, God.
2 For, behold, your enemies are stirred up.
Those who hate you have lifted up their heads.
3 They conspire with cunning against your people.
They plot against your cherished ones.
4 “Come,” they say, “let’s destroy them as a nation,
that the name of Israel may be remembered no more.”
5 For they have conspired together with one mind.
They form an alliance against you.
6 The tents of Edom and the Ishmaelites;
Moab, and the Hagrites;
7 Gebal, Ammon, and Amalek;
Philistia with the inhabitants of Tyre;
8 Assyria also is joined with them.
They have helped the children of Lot.
Selah.
9 Do to them as you did to Midian,
as to Sisera, as to Jabin, at the river Kishon;
10 who perished at Endor,
who became as dung for the earth.
11 Make their nobles like Oreb and Zeeb;
yes, all their princes like Zebah and Zalmunna;
12 who said, “Let’s take possession of God’s pasture lands.”
13 My God, make them like tumbleweed;
like chaff before the wind.
14 As the fire that burns the forest,
as the flame that sets the mountains on fire,
15 so pursue them with your tempest,
and terrify them with your storm.
16 Fill their faces with confusion,
that they may seek your name, LORD.
17 Let them be disappointed and dismayed forever.
Yes, let them be confounded and perish;
18 that they may know that you alone, whose name is the LORD,
are the Most High over all the earth.

1 See how good and how pleasant it is
for brothers to live together in unity!
2 It is like the precious oil on the head,
that ran down on the beard,
even Aaron’s beard;
that came down on the edge of his robes;
3 like the dew of Hermon,
that comes down on the hills of Zion:
for there the LORD gives the blessing,
even life forever more.

Passages from the World Messianic Bible