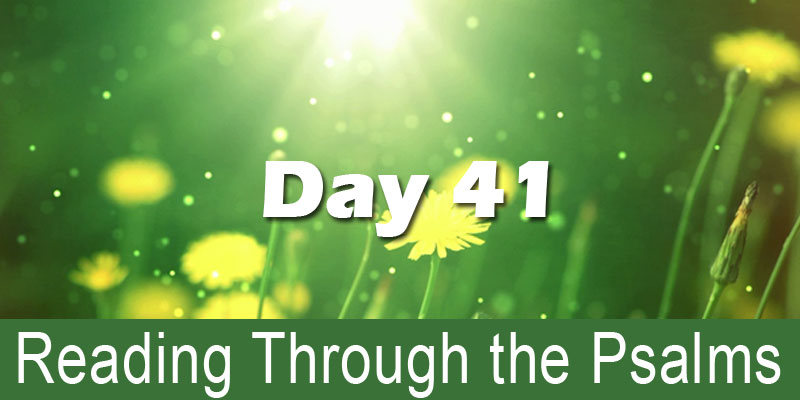 Psalm 91 is one of the most powerful of the Psalms written by David speaking of God’s deliverance and salvation (Yeshua.) It is God’s “911.” Satan himself quoted the verse 12 of the Psalm when in the wilderness temptation, he suggested that he through himself off the cliff because angels would lift him up (Luke 4:11-12, Mattthew 4:6-7.) Psalms 41 and 141 both illustrate the characteristics of the person who can have that faith in the deliverance of God.

Jesus’s response to Satan is one that every Christ follower should take note of, “Do not test the Lord your God.”

Deception and misdirection often use truth to tell a lie. That was Satan’s strategy in his temptation of Jesus, distort Scripture to justify what would have been a sin.

Which is why when using Scripture as a support, sometimes the most pernicious lies and horrific doctrine have one tent pole Scripture that they use as a single support. No doctrine, belief, or action should justify itself by one verse. The Bible as a whole has to be taken into account, it all fits together.

How many times do we as Christians follow Satan’s wilderness path? We claim the promises and deliverance of God but ignore the rest. We reject God’s discipline, his guidance, and go our own way instead of submitting to him. (James 4:7.)

We do what we know we are not supposed to be doing, throwing ourselves off that cliff, and then go to God, claiming the blood of Jesus and never truly repenting, and go back out and do the same thing again.

The Bible gives us powerful promises of deliverance that we can stand on, but they are for those who submit themselves to God and put their trust in him (Psalm 91:1-2.)

1 Blessed is he who considers the poor.
The LORD will deliver him in the day of evil.
2 The LORD will preserve him, and keep him alive.
He shall be blessed on the earth,
and he will not surrender him to the will of his enemies.
3 The LORD will sustain him on his sickbed,
and restore him from his bed of illness.
4 I said, “LORD, have mercy on me!
Heal me, for I have sinned against you.”
5 My enemies speak evil against me:
“When will he die, and his name perish?”
6 If he comes to see me, he speaks falsehood.
His heart gathers iniquity to itself.
When he goes abroad, he tells it.
7 All who hate me whisper together against me.
They imagine the worst for me.
8 “An evil disease”, they say, “has afflicted him.
Now that he lies he shall rise up no more.”
9 Yes, my own familiar friend, in whom I trusted,
who ate bread with me,
has lifted up his heel against me.

10 But you, LORD, have mercy on me, and raise me up,
that I may repay them.
11 By this I know that you delight in me,
because my enemy doesn’t triumph over me.
12 As for me, you uphold me in my integrity,
and set me in your presence forever.

13 Blessed be the LORD, the God of Israel,
from everlasting and to everlasting!
Amen and amen.

1 He who dwells in the secret place of the Most High
will rest in the shadow of the Almighty.
2 I will say of the LORD, “He is my refuge and my fortress;
my God, in whom I trust.”
3 For he will deliver you from the snare of the fowler,
and from the deadly pestilence.
4 He will cover you with his feathers.
Under his wings you will take refuge.
His faithfulness is your shield and rampart.
5 You shall not be afraid of the terror by night,
nor of the arrow that flies by day;
6 nor of the pestilence that walks in darkness,
nor of the destruction that wastes at noonday.
7 A thousand may fall at your side,
and ten thousand at your right hand;
but it will not come near you.
8 You will only look with your eyes,
and see the recompense of the wicked.
9 Because you have made LORD your refuge,
and the Most High your dwelling place,
10 no evil shall happen to you,
neither shall any plague come near your dwelling.
11 For he will put his angels in charge of you,
to guard you in all your ways.
12 They will bear you up in their hands,
so that you won’t dash your foot against a stone.
13 You will tread on the lion and cobra.
You will trample the young lion and the serpent underfoot.
14 “Because he has set his love on me, therefore I will deliver him.
I will set him on high, because he has known my name.
15 He will call on me, and I will answer him.
I will be with him in trouble.
I will deliver him, and honor him.
16 I will satisfy him with long life,
and show him my salvation [yeshuah-ti].”

1 LORD, I have called on you.
Come to me quickly!
Listen to my voice when I call to you.
2 Let my prayer be set before you like incense;
the lifting up of my hands like the evening sacrifice.
3 Set a watch, LORD, before my mouth.
Keep the door of my lips.
4 Don’t incline my heart to any evil thing,
to practice deeds of wickedness with men who work iniquity.
Don’t let me eat of their delicacies.
5 Let the righteous strike me, it is kindness;
let him reprove me, it is like oil on the head;
don’t let my head refuse it;
Yet my prayer is always against evil deeds.
6 Their judges are thrown down by the sides of the rock.
They will hear my words, for they are well spoken.
7 “As when one plows and breaks up the earth,
our bones are scattered at the mouth of Sheol.”*
8 For my eyes are on you, LORD, the Lord.
In you, I take refuge.
Don’t leave my soul destitute.
9 Keep me from the snare which they have laid for me,
from the traps of the workers of iniquity.
10 Let the wicked fall together into their own nets,
while I pass by.

Passages from the World Messianic Bible